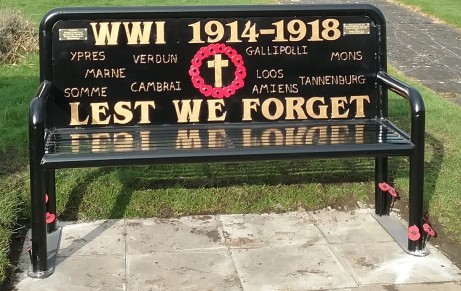 Young people from Brandon Carrside Community Centre having been working with older people from their community to commemorate the First World War.  The HLF, Key Fund and Parish Council funded project has involved trips to The Royal Armouries Museum in Leeds, the Imperial War Museum in Manchester and the battlefields of northern France.

As part of the project the group designed six benches which will be unveiled in Brandon, Meadowfield, Langley Moor, New Brancepeth, Esh Winning and Ushaw Moor.  The bench shown on this page can be found at Lowland Road, Brandon.

The bench at Leesfield Drive, Meadowfield will be unveiled as part of the group’s Commonwealth Day Celebration on 13 March 2017.  The celebrations will also involve a brunch at the Carrside Community Centre at 9:30.  The raising of the flag at the Centre at 10:00 will be accompanied by standard bearers and ex-Service personnel from the British Legion.  The theme of Commonwealth Day 2017 is particularly appropriate for this First World War commemoration: “A Peace Building Commonwealth”.  Please note the times on this site have been updated.