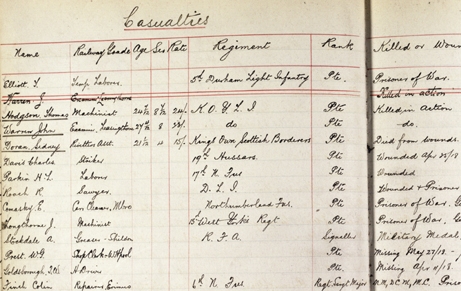 List of men serving in the military during the war

Transcript of a North Eastern Railway [NER] ledger giving information about men who worked for the company at Shildon, Darlington, Middlesbrough and Erimus District, Ferryhill, and West Hartlepool works, who were injured, killed, or died through their war service.

In many cases gives information about job, length of service with NER, who served with in the military, date of death or injury, details of dependents.

Names may also appear on individual works ledgers. Entries crossed out are crossed out or superseded in the original document.