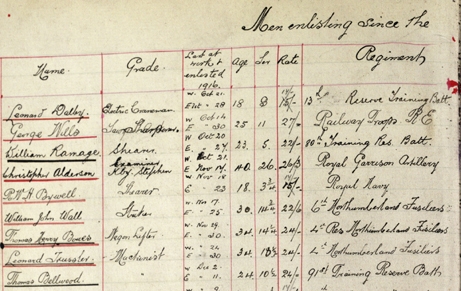 List of men serving in the military during the war

Transcript of a North Eastern Railway [NER] ledger giving information about reservists, territorials, and men enlisting who were employed at the works in Shildon.

In many cases it gives information about the men’s job and length of service with the NER, when they left work or enlisted, who they served with in the military, address, if killed or wounded, and when they resumed work with the NER.

Some names may appear twice where the man was discharged and re-enlisted, sometimes returning to work in the interim. Men may also appear separately on the casualties or discharge lists.