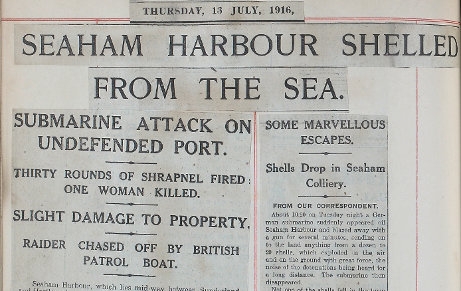 Local newspaper reports of the attack on Seaham in 1916

George Smith Boggon (1888-1950) was born in Dawdon. In 1911 he was working as a miner in New Silksworth and by 1914 he had moved to 12 Maureen Terrace, Seaham Harbour. He evidently had an interest in the news for he kept a scrapbook of newspaper cuttings about the First World War, which has been preserved with the records of Seaham Urban District Council. Between 1921 and 1924 he became a news correspondent in Seaham Harbour (Kelly’s Directory).

Here is a transcript of pages 48-49 from his scrapbook, containing local newspaper reports from July 1916:

Seaham Harbour, which lies mid way between Sunderland and Hartlepool, was shelled by an enemy submarine on Tuesday night, although no direct hits were made on the town, the missiles passing westward.

Fortunately, there was only one casualty, a woman named Mary Slaughter, belonging to Hebburn, being killed while passing through the yard at Seaham Colliery. Her companion, Miss Jennie Brown, had a narrow escape from sharing a similar fate. The only damage done was to a house, which was pierced by a shell.

The marauder was evidently disturbed in his attack on the undefended town, a British patrol boat coming on the scene, and after being chased, sounds of firing were heard at sea. The following is the official report: —

“Press Bureau, Wednesday, 12:45 p.m. The following communique was issued by the Field Marshal Commanding-in-Chief, Home Forces: —
12:20 p.m. At 10:30 last night a German submarine appeared off the small undefended port of Seaham Harbour.
She approached to within a few hundred yards of the town, and then opened fire.
Some thirty rounds of shrapnel were fired from a 3-inch gun. Twenty rounds fell in the direction of Dalton-le-Dale, and a dozen rounds fell in and about Seaham Colliery.
A woman who was walking through the colliery yard was seriously injured and died this morning.
One house was struck by a shell.
No other casualties occurred.”

From our Correspondent
About 10:20 on Tuesday night a German submarine suddenly appeared off Seaham Harbour and blazed away with a gun for several minutes, sending on to the land anything from a dozen to 20 shells, which exploded in the air and on the ground with great force, the noise of the detonations being heard for a long distance. The submarine then disappeared.
Not one of the shells fell in the town of Seaham itself, all going high over the place, and falling or bursting about a mile and a half to the west, mostly in the fields.

Seaham Colliery – a village near, but a good distance from the sea – received several of the shells. Two women, Mary Slaughter, married, belonging to Hebburn-on-Tyne, a visitor, and Miss Brown, a daughter of the lady with whom Mrs. Slaughter was staying, were walking to Miss Brown’s house when the shells commenced to explode.

Died in Infirmary
Mrs. Slaughter was struck and severely injured, and after being medically attended was conveyed to Sunderland Infirmary, where she died yesterday morning.

The other young woman lay flat on the ground and escaped.

The family of Carl Mortinson, miner, Doctor-st., had a remarkable experience. The nose of a shell demolished a portion of their back yard wall, drilled a hole clean through the kitchen wall, flew across the room, and alighted near the front door, but did no harm to any of the occupants.
Only Mrs. Mortinson was in the kitchen, and the shell missed her. The rest of the family were in bed in an upper room.

A shell which burst in a field caused a large hole, and ploughed up the sods for a considerable distance. Another shell passed close to a coal mine.

A FIVE MINUTES’ BOMBARDMENT
Inquest on Victim of Submarine Attack
An inquest was held at Sunderland Infirmary last night on Mary Slaughter, the victim of the bombardment on Seaham Harbour on Tuesday night. The deceased was 35 years of age, and the wife of John Slaughter, blacksmith, of 107, Victoria-rd., Hebburn.

Miss Jennie Brown, of High Colliery, New Seaham, stated that the deceased was her cousin and had been staying with her on a visit. On Tuesday night, between 10:15 and 10:30, they were returning from Dawden. Passing through Seaham Colliery yard, they heard a noise like an explosion, and saw a bright flash in the distance.

In turning witness stumbled and fell down, and when she got up again saw Mrs. Slaughter lying on the ground apparently injured. Assistance having been obtained, she was removed to Sunderland Infirmary.

Submarine Disturbed
Police-Inspector Morgan, of Seaham Harbour, said the firing of the submarine lasted about five minutes, during which the enemy vessel discharged at least a score of shells, 19 having been traced up to the present. The submarine was well up in the water, and men could be seen moving about in the boat. She flew no flag.

The shells passed over Seaham Harbour westward. He saw three shells and produced a piece of one picked up near where Mrs. Slaughter was injured. It was marked Krupp.

A British patrol boat evidently disturbed the submarine, which made off in a south-easterly direction, pursued by the British boat. A little later sounds of firing were heard at sea, but he could not say whether the submarine was hit or not. He had made inquiries, and discovered no person had been injured or property damaged in Seaham Harbour.

Warfare Extraordinary
The House Surgeon at the Infirmary said death was due to shock and haemorrhage following injuries about various parts of the body.
The Coroner in summing up, said the jury would have no difficulty in coming to the conclusion that death was due to the explosion of a shell fired by a German submarine. They need not enter into any other question, nor did he think they should make any comment on the extraordinary mode of warfare. He thought in view of everything, they could safely leave vessels of the class of the German submarine to his Majesty’s Navy.

The jury returned a verdict in accordance with the Coroner’s suggestion, adding a rider expressing sympathy with the relatives of the deceased.