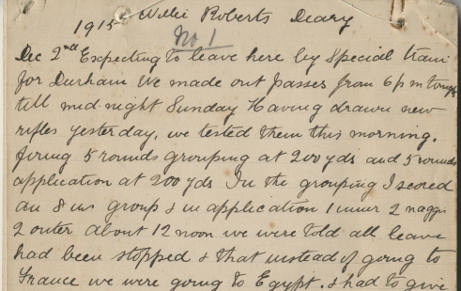 William Roberts’ diaries are in the Durham Light Infantry regimental archive at Durham County Record Office. There are five diaries covering the whole of the time that he was on active service with the 18th Battalion DLI in Egypt and on the Western Front. Sadly they do not tell us about the time he spent training at Cocken Hall in County Durham during 1914-1915.

Durham at War volunteers have been transcribing the diaries and the first three volumes are now online so that you can follow William’s story word for word.

Here are some excerpts from the diaries:

2 January 1916
Had a walk along the canal bank. I like to see the boats coming through and watch the natives unloading stones by carrying them in baskets on their shoulders. Anyone not knowing of the canal and standing in the desert would wonder however a large ship had got into the desert. I have stood and watched French cruisers on the sand, and as I could not see the water they just appeared to be floating on the sand.

3 January 1916
A windy day, the sand blowing about got into our eyes and almost choked us, so that the only comfortable place was in the tent. About 5pm I with 3 others went on guard over six prisoners, and also with them I think would be about 99 million fleas.

12 March 1916
Last Sunday we were in Egypt, today we are in France, being jolted along northward in a cattle truck.

4 April 1916
I feel a new man. I have had a good wash in a pond. 6pm moved off to a new camp about 3 miles away. Reaching the camp we found it composed of low huts, built in a wood out of sight of aeroplanes. The huts are mostly of canvas. There will be about 48 men in each hut.

17 May 1916
Night I was on sentry in Rat Street, an old trench which joined up two first firing trenches. The trench was rightly named, for there were rats all over and such big ones. They were running about and squealing all night. Once I sat down for a time, but was startled by one sitting on my arm biting my fingers.

1 July 1916
Reached the waiting trench about 4am. We opened a violent bombardment on the German lines. 7am a village blown up by our mine and 7.30 advance started. We were the 4th battalion to go over, which we did about an hour later. The short but terrible rush through the fierce curtain fire with men falling on all sides I shall never forget. High explosive shells fell all round us. The sights I saw are too terrible to write about and men almost blown to pieces were lying side by side. Unable to proceed further, the order to retire was given and I thanked God that I came through the terrible ordeal unhurt. I went to work in our front line at night but had to come away as it was almost blown to pieces. There again I saw dead and wounded lying side by side. Some were moaning and others had so far lost their reason that they were laughing and singing.

2 August 1916
Most of us are about done up which I think accounts for D Company going to relieve us this afternoon. Misty morning. I went over the top, wiring till the fog lifted. Afternoon relieved by D Company, we went back to the support trenches. Night I was detailed to bury some parts of a man or men who had been blown to pieces. The pieces were in sand bags on a stretcher. We had great difficulty in carrying the stretcher to the burying ground and once there we were in danger from machine gun bullets, which were flying over and around us. We had to fill the grave in almost lying on our stomachs.