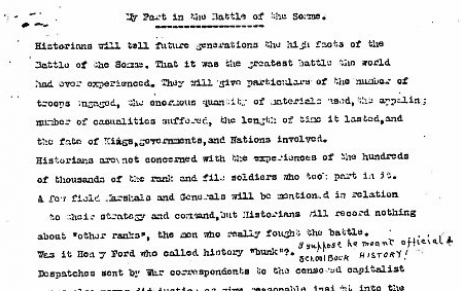 Charles Moss was one of the lucky ones. He survived the first day of the Battle of the Somme when many of his comrades in the Durham Pals did not.

‘So here was one of those marvellous circumstances that happened to me while I was in the Army. Another one of those astonishing escapes of which I had had several since I joined the Army. There is no doubt that if it hadn’t been for the mistake about the place of the two gun teams and the startling outburst from Corporal Forshaw I most certainly would have been over the top, and once over it meant death or mutilation’.

Charles Moss had great respect for the Durham miners who served alongside him.

‘The Kitchener’s Army pit lads proved themselves to be “born soldiers.” What a great pity it is impossible to estimate how much the country owes to the miners for the ultimate victory, and the good hearted manner of it. All the world ought to know how many miners there were in the regiments that broke through the German front at Contalmaison and Fricourt and repulsed the enemy counter attacks at Martinpuich, Butte de Warlencourt and Flers’.

‘It was their contempt of danger and death that won them through. I had been prepared for anything that might happen to me on Active Service, but I never “asked for it” like the pit lads did, and as far as my part in the attack had affected me I felt that my life had become far more vital and worth living’.

He felt compelled by his experiences to write this memoir because so few of the ordinary soldiers talked about their deeds in battle, let alone wrote about them.

‘The specially personal, direct contact, hand to hand nature of the deeds of rankers should not die with them, they should be available to their family at least. But because of the rankers’ silence and their policy of “Oh forget it,” the most vital and intimate things of a battle are lost forever’.

Charles Moss wanted future generations to be able to compare his experiences with what they are taught now about the Battle of the Somme.

Download this online transcript to read and reflect on the events of a hundred years ago, seen through the eyes of a Sunderland man who compared the artillery barrage on 1 July 1916 to the heavy seas rolling onto Hendon beach during winter storms.

You can read more about Charles Moss and the 18th Battalion DLI by following the links at the bottom of this page.