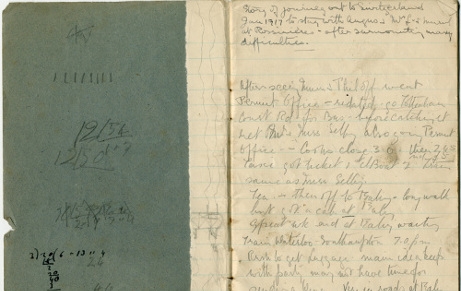 Connie Kirkup's story of her journey out to Switzerland (8 pages; 244 KB)

Connie Kirkup, accompanied by Miss Selby, was part of a Red Cross party of wives and fiancees on an arranged visit to British Prisoners of War. She went out to visit her fiancé, Angus Leybourne, who was interned at Le Grand Chalet in Rossiniere, Switzerland. Angus’s mother and sister Muriel had already travelled out to visit him.

The Red Cross party left Waterloo Station for Southampton on 22 January 1917, then took the overnight boat to Le Havre.

Arriving at Le Havre on the morning of the 23rd, somehow Connie and Miss Selby managed to miss the rest of the Red Cross party, which left on the 7.35 train, so they took a ‘Paris Rapide’ train which departed on time but arrived two hours late.

By the time they reached Paris the train for Switzerland with the Red Cross wives had already left. Fortunately Connie and Miss Selby were met at the station by a British Red Cross man who had instructions to collect two ‘lost wives’ and take them to the Red Cross headquarters in a luxurious hotel.

The next day the two women explored Paris before boarding the overnight train from the Gare de Lyon to Switzerland.

They arrived in Frasne at 7.00am on 25 January and went through Customs. There was a further luggage check at Vallorbe Station.

At Montreux they changed to an electric train for the final stage of the journey, and as they reached the station at Les Avants Connie found Angus waiting on the platform to meet her.

You can download a complete transcript of Connie’s diary here. We thank the Leybourne family for their generosity in sharing this material to commemorate the First World War centenary.