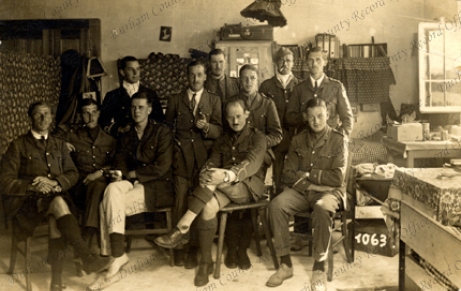 Elliot Angus Leybourne was one of the officers interviewed by the Committee on the Treatment of British Prisoners of War in 1916.

A record of his interview is preserved in The National Archives, ref. WO 161/95/69. This has been transcribed by one of the Durham at War project volunteers. Note that the actual dates when Angus Leybourne was wounded and captured in the action at Boetleers Farm are 25-26 April 1916, not as stated in the report.

REPORT OF CAPTURE AND IMPRISONMENT IN GERMANY

On the 19th of April 1915 our battalion landed in France and, having billeted four days behind the lines at Cassel and Poperinghe, were ordered to support the 8th Winnipeg Rifles (of Canada) under the command of Colonel Lipret.

At the moment this battalion was suffering very heavy casualties from an intense bombardment and a gas attack.

On the 23rd April we took over from the 8th Winnipeg Rifles, but owing to it being too light when we got into the trenches all the Canadians could not get back.

Early in the morning I was employed as signalling officer and had occasion to go over to headquarters for some telephone equipment. While going through the yard of the old farm which was then battalion H.Q.R.S. [Headquarters] I was hit in the thigh by a rifle bullet which must have been either a stray bullet or that of a sniper. As I afterwards found out the main tendons of the leg had been severed, which deprived me of the use of this leg.

Two of my signallers carried me into the basement of the farm, which was being used as a hospital, our doctor and an orderly being on duty there.

During the whole day a most intense bombardment was kept up and many casualties were sustained by the wounded in this cellar from rifle fire which penetrated through the corrugated iron in front of the window.

It then became necessary to stop up all the holes in order to prevent any of the gas from entering.

By this time the night was coming on and the farm was almost surrounded, as the Germans had broken in on our right.

As night drew on I determined to make an effort to crawl back, but after a little inquiry found that the position was impossible, and, finding that I was barely able to get across the cellar, had to give up the idea as hopeless.

Night wore on and we still hoped that a counterattack might relieve our position, but dawn brought the Germans at our door. We explained that we were all wounded and were told to “Heraus”.

I dread to think what happened to those that were unable to move, as at that time there were terrible stories current, but with the assistance of two men I was conducted through a maze of German trenches, which I gathered had just been thrown up in the night, back to the first German field dressing station.

It was a long, painful journey under the circumstances.

While this mournful proceeding was taking place a German who was conducting us back, for no apparent reason, struck one of our men across the head with the butt of his rifle causing him further injuries. The man was spoken to by an N.C.O. and the matter then closed.

At the field hospital we were examined and put into trains; I and another officer were in a cattle-truck to ourselves.

After some time it was discovered that we were officers and we were transferred to a 3rd class compartment.

The journey was naturally most trying; we seemed to be shunted over the greater part of Belgium, and were three days and three nights in getting to our destination.

The sanitary arrangements for the men were very bad, no thought being given to these essential arrangements throughout the journey.

Our final destination was Paderborn, a centre of the Roman Catholic Church, and I was finally placed in a convent which had been converted into a hospital. Here things were quite well managed, there being about 12 English and 20 French.

There is a small incident which occurred while I was at this hospital which may be worth describing as it indicates the extent to which the German military machine is allowed to enforce its discipline.

Our hospital looked out on to a square, where squads of men paraded for instruction; the N.C.O. in charge was evidently instructing his men in musketry and one youth appeared to be particularly dense regarding some small point.

The N.C.O. eventually got so exasperated at his behaviour that he took the scabbard of his bayonet and struck his recruit over the head cutting him so badly that he had to come into our hospital for a fortnight.

I stayed in this hospital for about a month where I was treated quite as well as I could wish for, the sisters being only too pleased to show kindness to us.

After some time I realised that I was not making any progress and that the only thing to be done was to try and get a transfer to a proper hospital where I could undergo an operation.

I eventually arranged this and was taken up to a hospital called the Brüderhaus in the same town; this also was an institution run by catholics, the entire staff being monks.

I was at this time in a condition that I could have driven to the funeral and I therefore applied to be allowed to go, but the application was refused. I was not told on what grounds.

In three days time I was operated on successfully, and had to remain in bed for the next six weeks.

During all my experience in hospital I was treated with perfect civility, but I was surprised at the fact that none of the officers were treated as officers. All the time we were on the same rations as the men, and the orders were that there should be no difference made. This surprised me in a country like Germany where the German officer is placed above all others. We were told that the reason was because their officers in England were deprived of certain rights.

After some time, by payment of three marks per day, we obtained better feeding and a room to ourselves, which was a great comfort. I eventually left this hospital on Sept. 10, 1915, and was conveyed by 3rd class compartment to Gütersloh, Westfalen.

This camp was of considerable size, having about 2,000 officers and orderlies in it.

The situation was good, having been built for a convalescent home. There were about 12 houses capable of holding 100-150 in each and the sanitary arrangements were quite good. The recreation ground was all sand so that the ground was always clean.

The food, of course, was very bad indeed, and, until my parcels came out, I was dependent on my friends to help me in this respect. It would support life as shown by the fact that the vast majority of Russians existed on it; but I venture to say that they were in a very weak state of health compared with the English who were better fed on account of their parcels.

After two or three months there I noticed a considerable change in things at the camp. Whereas before it was absolutely forbidden for any two Englishmen to be living in the same room, now we were all put together in one house with our own common room. A canteen was opened and run by a committee of officers and anything could be bought subject to the permission of the commandant. The whole feeding arrangements were put into our own hands and a large new dining hall erected.

Most of these privileges were attributed to the visit of the American Ambassador.

Letters and parcels came fairly regularly; there were periodical occasions when there was an interruption in the service with Holland which sometimes delayed things for a week or two.

There was ample opportunity afforded for games of all kinds which were led entirely by the English section, and I am confident that this is the one thing that keeps the moral of the English better than that of the other nations who are suffering imprisonment, i.e., the fact that they employ the greater part of their time in this camp in games.

With all this one can see very clearly how a long imprisonment is telling on every single man under conditions of comparative freedom. I now look back on the incidents of camp life, and it would be impossible to relate how warped and petty rational men will become.

I have seen the most awful word-warfares occur over so small a matter as the taking of a piece of soap in the bathroom by another officer.

I merely state this as an indication of the general irritation which pervades a man after two years in camp. His views are getting narrowed and he is becoming more and more self-centred every day he stays there.

It is most marked how the weather affects everybody; on fine days things go on normally; but when a particularly bad day comes you will see men going for solitary walks or perhaps by two’s; you know it is best not to speak to them and they know the same of you. We are all trying to get rid of the same complaint.

The camp-commandant, Herr Von Goben, was rather an interesting character, a man of about 55 to 60 years of age with a good heart and a vile temper. Like all Germans, especially those that are privileged to have authority, he had acquired the art of shouting at the top of his voice on every possible occasion. But with it all there was a sporting strain in him which made one put him down as a white-man. The interpreter, on the other hand, was quite the opposite, perhaps owing to unfortunate circumstances, for he had married a Scotch wife, had considerable property in London, so that he struck a key-note half-way between us both. The result was he was always regarded with suspicion, and we certainly had not any cause to think otherwise. He always took every opportunity to get all possible information out of any new-comer whether it had any direct relation to the war or not.

Any money transactions made in camp were as far as we could gather exchanged at the market value at that time.

There is really very little that could be altered in camp; the whole affair is summed up by the fact that barbed wire confines these men to the limits of a few acres for an indefinite period with no prospects of release, so that the only cure is release.

The only suggestion I have to make is that every man who has been in a camp for two years should be released and interned in Switzerland; for his complaint after that time is as bad or worse than many who have been wounded and been fortunate enough to get straight to Switzerland.

There were a considerable number of rumours circulated about the exchange to Switzerland, and it was not until several months had elapsed and the first batch of French had left that word came that we were to go.

We were sent off to Constance with 12 hours’ notice, stayed one night at Darmstadt, and arrived at Constance, where we stayed the week-end.

The inspection took place here and we left on the night of May 30, 1916, for Switzerland.

Author: Committee on the Treatment of British Prisoners of War

Where to find this: The National Archives