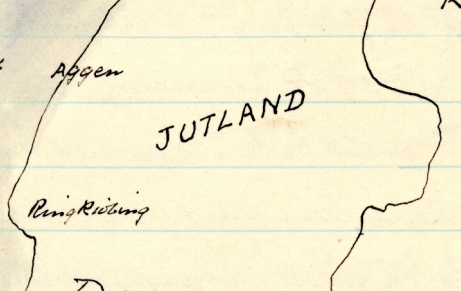 North-country men will figure largely when the full casualty list of the recent naval battle is announced.

Stoker Cochrane of H.M.S. Invincible is believed to have lost his life in the naval engagement. Before joining the Navy Cochrane was employed at the N.E.R. Engine Sheds. His father, Mr Robt. Cochrane, who lives at Red Hill Terrace, is an engine driver on the N.E.R.

Official information has been received from the Admiralty by Mr and Mrs T. Mavin of School Street, Boyne, Langley Moor, that their son, A.B. Mavin, of H.M.S. Black Prince, is presumed to have been lost in the naval battle in the North Sea last week. Seaman Mavin joined the Navy about 18 months ago, and was on H.M.S. Cochrane and then transferred to the Black Prince. He was about 23 years of age, and was employed at Littleburn Colliery prior to joining the Navy.

The death in action on one of the destroyers has been notified of Hugh J. Dingle, the medical probationary surgeon, son of the rector of Eaglescliffe, and nephew of Dr. Dingle, the medical officer of Middlesbrough. The bother of the deceased was killed while serving on the Gallipoli Peninsula. Surgeon Dingle was a Durham School boy, and after distinguishing himself as a three-quarter in his school days he played some great games for Durham University. He played for Durham County in the final of the county championship against Midland Counties at Leicester in 1914. He was a bit short of pace but a fine resolute player and a great favourite. He acted as captain of the Durham University XV.

Charles Dunne, a son of Mr Jos. Dunne, Edward Street, Consett, was a stoker on the Queen Mary.

Lady Eden, of Windlestone Hall, is among the bereaved; her youngest son, Mr Nicholas Eden, who was a midshipman on the Indefatigable, having gone down with his ship. He was only 16 years of age. Lady Eden’s eldest son was killed in action in the early stages of the war, and not long afterwards Sir William Eden died in London. The second son, who succeeded to the baronetcy, is interned in Germany; and her brother (Mr Robin Grey) is a prisoner of war. Her other son is at the front.

Capt. Sowerby, of the Indefatigable, brother of Lady Havelock Allan, of Blackwell Grange, Darlington, is among those lost. Capt. Sowerby was the eldest son of the late Mr T. C. Sowerby of Snow Hall, Gainford.

Staff-Surgeon Frank Gowans, R.N., the fifth son of Dr. William Gowans of South Shields, was serving on board the Queen Mary until very recently, but it was ascertained on Saturday that he was appointed to another ship a fortnight ago, and is therefore safe.