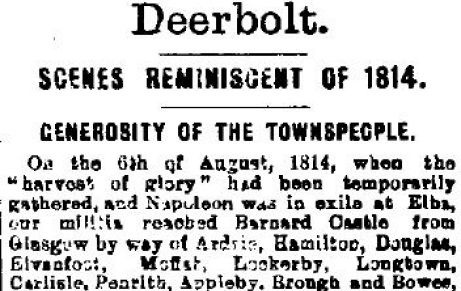 GENEROSITY OF THE TOWNSPEOPLE

On the 6th of August, 1814, when the “harvest of glory” had been temporarily gathered, and Napoleon was in exile at Elba, our militia reached Barnard Castle from Glasgow by way of Ardrie, Hamilton, Douglas, Elvanfost, Moffat, Lockerby, Longtown, Carlisle, Penrith, Appleby, Brough and Bowes, after ten years’ absence. The cheering of the people made the welkin ring.

Scenes of a similar nature were witnessed in Barnard Castle streets last Thursday morning when the Durhams left Deerbolt camp, the enthusiasm of the populace being unbounded, while the troops were in jubilant spirits. The day was memorable, and the popularity of the regiment was fully established.

Young lads carried soldiers’ rifles exultantly, and were striding grotesquely to keep in step with their elders : lasses threw kisses to their ” boys ” : women with babes in their arms, and older children holding on to the maternal skirt , forged ahead in the seething crowd : loud hurrahs anon were raised by the jaunty Durhams as they recognised acquaintances : and, when challenged by some gallant ranker as to their morale —” Are we downhearted ? “— up went the hoarse response from the near column, ” Noa.” And thus sped the hours in an epoch-making day, furnishing a thrilling chapter in local history episodes, indeed, which will long live in the popular recollection. Aye, and the interest was deep and heartfelt, for there was the touching memory that they were all somebody’s relatives.

Sing-songs were more or less the order of the previous night, while a social was held in the Church Mission Hall. But the centre of attraction was the Guild Recreation-room, where an organised treat to the men took place. The ladies responsible to the War Emergency Committee for conducting the institution arranged a farewell supper and concert, and the room was crowded. The vocalists were chiefly of the regiment, supple­mented by Mr. J . Brown and the Rev. Spencer Wade, An excellent repast was served, the cost of which was generously defrayed by a local gentleman , while cigarettes were provided by another kind-hearted resident.

The Chairman of the Council addressed a few words expressive of the appreciation which the townspeople felt for the regiment; and the Rev. Spencer Wade pointed out that the town admired the men because they realised that they were soldiers who had made great sacrifice in order to prepare themselves for the defence of their country.

The Rev. F.G. Gatehouse said he had found Mr Wade to be a gentleman, and one who permitted the real [ ] to appear through the cloth. He wished the men all God-speed, and was confident that they would prove them-selves in the future what, indeed, they had been in the past, worthy of the name of a British soldier.

One of the sergeants called for three cheers for the people of Barnard Castle, and for the ladies who had done so much to make their stay in the town so pleasant. Three rousing cheers followed, and the proceedings terminat­ed with the regimental march, “Auld lang syne,” and the national anthem.

The regiment moved in detachments, and were conveyed in special trains drawn by main line engines. They travelled by way of North-allerton, Sinderby, Holbeck, and Leeds. The first party left about half-past eight, and the band and headquarters and rank and file at eleven o’clock promptly. Meanwhile it may be noted that the War Emergency Committee had decided to present each man with a campaign wallet and a parcel of sandwiches. Colonel Caulfeild said such an arrangement would be thoroughly appreciated.

A band of busy workers plied their nimble fingers in passing the presents to the entrained men, the preparation of which had run into the early hours of that morning. Everybody helped even as a heaven-sent duty. The men were in capital health, fit, and exuberant in spirits, and they cheered ” Old Barney ” to the echo.

The Rev. S. G. Beal , the Rev. J. Penrose Hodgson, the Rev. Spencer Wade, and the Rev. F. G. Gatehouse, and scores of working well-wishers besides were on the platform. A letter has been received by the Chairman of the Committee from Father O’Leary, an army chaplain, regretting that at the last moment he found it impossible to be present…

The signal was given, and the huge locomotive began to move. As the speed of the train became perceptible a mighty roar resounded in the station rafters, and the cheering was repeated again and again as the dense mass of humanity assembled at the Harmire crossing, was cleared by the onrushing troop train.

Supt. Riddell sent a letter to Colonel Caulfeild expressing his high approval of the conduct of the regiment, and a similar
communication was sent by the Chairman of the Council. The commanding officer replied to both letters, and set out his gratitude for the handsome treatment accorded to the battalion. The men, he said, might move again and again, and though they were a distance away they would never forget the goodness of the inhabitants of Barnard Castle.

Where to find this: Teesdale Mercury Archive
http://www.teesdalemercuryarchive.org.uk/