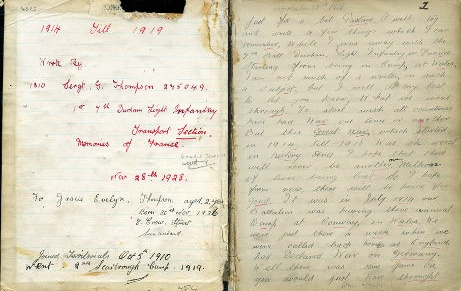 In November 1928, ten years after the war had ended, George Thompson started to write a memoir of his wartime experiences as a transport driver with the 7th Battalion Durham Light Infantry. He wrote it for his daughter Gracie Evelyn Thompson, who was then aged two.

By Christmas George had filled 158 pages, covering his story from the day war was declared in August 1914 to the date when he left France to be demobilized on 6 January 1919. You can almost hear the words tumbling onto the page as his memories came flooding back. Pages 158-179 contain reminiscences of the Second Battle of Ypres, which George copied from the Sunderland Echo, his local newspaper. Pages 180-184 relate to memorials and the deaths of French military leaders, and the final 15 pages record events of national, local and personal interest from 1929 to 1934, including George’s work at Vaux’s brewery.

When extracts from George Thompson’s memoir were published on the BBC’s World War One at Home website in 2014, this was the most popular story from the North East region
‘Vaux Brewery, Sunderland: War Horse’ http://www.bbc.co.uk/programmes/p01wv1v2

Now you can read the complete story of this brave yet modest man who loved his horses – thanks to volunteers on the Durham at War project, who have transcribed the entire memoir. Here are a few quotes from the memoir:

I was stationed in the Drill Hall for a while, while the Government was buying horses for war service. I still can remember the old drivers saying take care of him, he is quiet and a good worker and will go anywhere. Little did they think what was in store for them, same about myself.

All the time we were stationed at St Jean our horses never had their harness off. We slept under the wagons best way we could. We got shelled all day long while we were at St Jean. After a few days we went further back, to a large field on the road side near to Ypres. Here our horses had their harness taken off for the first time. We gave them a good cleaning down and they looked a bit better.

I remember one night when we [were] going up with rations they gave us an order to put our gas masks on, and we had to put them on our horses. We had some game on with them.

Many a time I used to feel sorry for them, they used to stand out in all weathers, and sometimes up to their knees with mud. I can always say, while I had a pair of horses in France, I always did my duty to them. I have seen sometimes some of our Companies would be far away from others and they took with them their own Transport. Sometimes 2 or 3 wagons would be told off to go with them. If I was one of those drivers the first thing I used to do, if possible, to look for a shelter for any horses. Same thing with the other drivers. One out [of] the two horses that I took away from Newcastle was still with our Battalion when I left them after the war was over.

While we were at Fricourt we had some heavy work to do, such as leading trench boards and different kinds of metal, all for the trenches to make ready for a big push. One day I was sent down to a Royal Engineers dump in Albert, with a convoy for 6 General Service wagon loads of trench boards. It was the first time we had been to this dump. It was a huge place and to our surprise, when we got inside there were hundreds of German prisoners working here, and some of them could speak English very well, and one of them knew where Sunderland was, very well. He used to come here for a holiday, he said, as his parents lived here.

I saw something which caught my eye and I went to have a look at it. It was just beside a cross road, it was just like a tree. You went inside, then you could walk up, and look through a hole and see round for miles. This was a look out for the German Artillery.

It used to be great when a battalion passed us, and they belonged to Sunderland, you would hear a cheer go up, ‘good old Sunderland’ they would shout.

We retreated through towns full of people. It was awful to see them taking with them as much as they could carry, and their little children crying over them; that touched me most.

So the old 50 Division was no more; we were put into the 8 Division, where all the polishing went on. Everything had to be polished, on our wagons they made us polish everything that could polish. It was Polish Division, I called it. You did not get much time to spare when you came down the line for a rest, all wagons, harness and horses had to be spick and span, and they saw that you did it.

Well, while I was at Mondement I was told I had got the Military Medal for getting rations up to our Battalion through heavy shell fire on many occasions, and saving that Sergeant’s life at Merville. I got the medal on 21-5-19.

While we were at Mondement we were just sleeping anywhere we could, some under wagons and some under large trees. Some days we would [be] soaked through with the heavy rains. There you had to stick it, no big fires to dry your clothes, and no fine beds to lie in.

The only man that troubled me was the Regimental Sergeant Major. He was always trying to catch me on something. His reason for this was, he said, I was too much among the men. I gave him my answer one day and told him that I had been soldiering with these fellows since the first outbreak of this war, and there was no reason to bully and shout at them. That’s what he wanted me to do. Kind word sometimes went a long way, I said.

The room where we slept in there was a cellar underneath it and this old woman kept her money hidden there all the time during the war. She got it out when the Germans cleared out. And she gave the four of us three coins each as a souvenir of the war. One coin I have still got. She also gave each of us the day when we left her a present. I got a jug she said was over hundred years old. And I think it is well over that, it was passed from one family to another she said. One of my pals got a gold brooch, the others got a vase each. She was a fine old lady. I often wished I could have went over to France and seen her.

We'd love to know if you enjoyed reading this.

If you are looking for another 'long read', try Henry Wilkinson's prisoner of war diary on Durham at War http://www.durhamatwar.org.uk/story/11369/