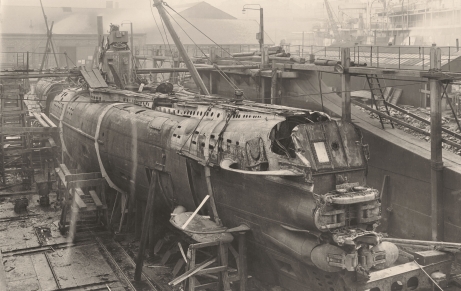 This photograph shows the Submarine's compartment No. 6, including its sleeping berths and access to the Engine Room DS.SWH/5/3/2/14/1/44, Tyne & Wear Archives & Museums

This photograph shows the control room in the Submarine, including the manhole to the periscope well, hand wheels for pressure gear, valve wheels for flooding and blowing and the air pressure gauges. DS.SWH/5/3/2/14/1/26, Tyne & Wear Archives & Museums

The submarine captured with Werner Fuerbringer in command

These picture are taken from an album found in the Swan Hunter shipbuilders collection at Tyne & Wear Archives. The album is from 1918 and documents the U.B. 110 before she was scrapped on the dry docks of Swan Hunter Wigham Richardson Ltd, Wallsend.

On the 19th July 1918, when attacking a convoy of merchant ships near Hartlepool, she herself was attacked by H.M. Motor-Launch No. 263 and suffered from depth charges. Coming to the surface she was rammed by H.M.S. Garry, a torpedo boat destroyer, and sunk.

In September she was salvaged and placed in the admiralty dock off Jarrow slake. She was then berthed at Swan Hunter’s dry docks department with an order to restore her as a fighting unit.

The Armistice on 11th November 1918 caused work on her to be stopped. She was towed on the 19th December 1918 from Wallsend to the Northumberland Dock at Howdon and was subsequently sold as scrap.

The album of photographs, taken by Frank & Sons of South Shields, documents the U.B. 110 in extensive detail. The photographs provide a rare glimpse into the mechanics and atmosphere of the raised German submarine.