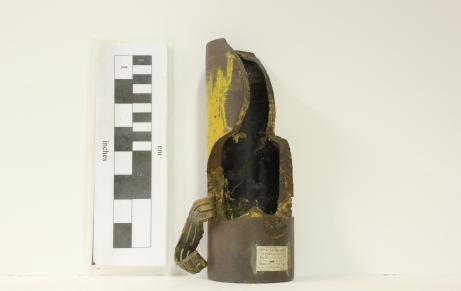 This is one of thirty-nine shells fired from just outside the mouth of Seaham Harbour by a German U-boat (submarine) on 11 July 1916.

Most of the shells landed around New Seaham and Dalton le Dale. According to a report in the 4th Battalion war diary, some shells were found near the Mill Inn at New Seaham.

There are varying reports of how many shells were fired, but the submarine commander, in his memoir, said that there were 39, because his U-boat was numbered U 39.

Where to find this: Durham Light Infantry (DLI) Collection, http://www.durham.gov.uk/dlicollection

Related to
this object