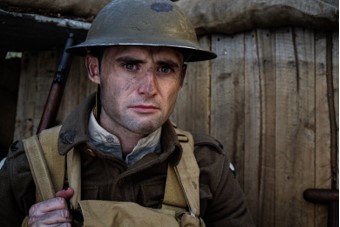 101 years on and never forgotten.

A one-man play as part of the 2019 Edinburgh Festival Fringe, Echoes of Villers-Bretonneux follows the exploits of the 15th Brigade AIF on the Western Front in World War One. You’ll witness the journey of George Stevenson through his eyes and see nightmarish horrors of the Western Front trenches. Mate-ship, courage and the ultimate cost of war reveal real events at the battle of Villers-Bretonneux.

In France of 1918, the Allies are about to lose the war. A deadly night assault led by the Australian troops of the 15th Brigade could swing the balance. The Australian soldiers of the 13th and 15th Brigades played a crucial role in recapturing the village in Northern France. They stood as the only buffer between the overwhelming Germans and the Allied headquarters at Amiens. If Villers-Bretonneux was not recaptured, then the Allies would lose the war.

“I was fascinated at how defining this encounter was, but amazed that the story hadn’t been told truthfully,” said writer/actor Shane Palmer. “My entire knowledge of Australians in WW1 was limited to Gallipoli and other pockets of the Western Front, but this decisive battle seemed to be totally marginalised. It happened to fall on the 3rd anniversary of ANZAC day; yet so few people actually know the story.”

Echoes of Villers-Bretonneux aims to tell the story of the lead-up to and battle of Villers-Bretonneux, as a piece of immersive theatre that pays full respect to what was endured and ultimately survived by the soldiers in the muddy, vermin-infested trenches of France. Discover what it was really like, how survival is a miracle, and you’ll be inspired by the spirit of kinship, which occupied their minds from the artillery bombardments and machine guns.

We debuted at the 2018 Melbourne Fringe Festival, and are very excited to share this incredible story with an international audience at Edinburgh.