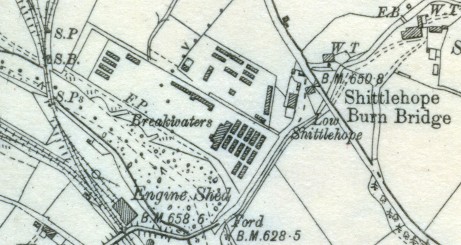 Established 18 August 1916, Newlandside Working Camp, Stanhope had prisoners extracting limestone from Newlandside Quarry. Inspections of several working camps were carried out including Stanhope. At the time the inspection was carried out on 19 September 1916, it was under the command of Captain HW Shearsmith (regiment unknown) and at this time held 220 German military prisoners.

The inspection of Stanhope states there are 24 bell tents and gives information of the daily routine of the prisoners, food and sanitary arrangements, discipline and medical services (a British doctor living at Stanhope visits the camp). It also includes complaints by the prisoners which mainly refer to the condition of the tents.

In early 1918, the parent camp changed from being Handforth to Catterick, North Yorkshire.

Site first appears on 3rd Edition Ordnance Survey map and is gone by 1940s. Info from County Record Office suggests is a Prisoner of War Camp. Documentary evidence suggests that a hut from this camp ended up as a War Memorial Mission Hall at High Grange c1920, the only surviving piece of this hut now being a memorial plaque located in St. Pauls’ Church, Hunwick.

Keys to the Past
http://www.keystothepast.info/article/10339/Site-Details?PRN=D44199

Lands and buildings in the occupation of the War Office

Sale catalogue of hutting and fitments of the prisoner of war camp, Stanhope

Report of "Sale of Hutments" at Stanhope Prisoner of War Camp