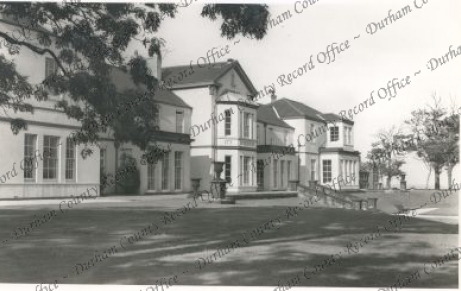 Seaham Hall is located within its own private grounds on Lord Byrons Walk, Seaham. Constructed in circa 1790, the building underwent four main phases of occupation – aristocratic residence, war hospital, sanatorium, private commercial accommodation, between which are brief periods of abandonment lasting no longer than ten years.

As a private residence, Seaham Hall changed hands in terms of ownership for two times, before Frances Anne Vane-Tempest and Charles Stewart purchased the Hall from Sir John and Lady Milbanke in 1821. Charles Stewart later became the 3rd Marquis of Londonderry and pioneered a key urban expansion scheme that saw Seaham’s rapid commercialisation by constructing Seaham Harbour and setting up various collieries. Frances Anne Vane-Tempest, the Marchioness of Londonderry, oversaw the establishment of schools and churches within Seaham. The Marchioness was known to have lived in Seaham Hall for a decade as a widow, until her death.

Seaham Hall was donated to the government by the 7th Marquis (Charles Vane-Stewart-Tempest) and Lady Londonderry during the Marquis’ absence from Seaham – stationed on the Western Front with the Royal Horse Guard. The Seaham Hall Auxiliary Convalescent Hospital opened on 1 July 1915, to house wounded soldiers who were from Seaham District and under Lord Londonderry’s employment prior to the War. This included over 2500 workers within the Londonderry family’s mines, as well as service staff and gardeners – many of whom were assigned to the 2nd Battalion Durham Light Infantry, which was deployed overseas.

In the broader context of wartime north east, the grounds across Seaham Hall were entrenched by Company A of the 4th Battalion Durham Light Infantry from 1915, who were stationed at Seaham Harbour and district during the First World War. A zeppelin was allegedly sighted over Seaham Hall on the night of 5 April 1916, when Hull was bombed. The sighting was never confirmed.

The Hospital was later absorbed into the wider network of convalescent hospitals across the country, taking in soldiers from Northumberland, who would spend their final stages of recovery at Seaham Hall Hospital. By March 1918, there were over 100 beds in the Hospital itself, which had taken care of over 2700 wounded soldiers, and had been under the management of three matrons: Nurse Noble, Mrs. Smith and Miss Mosley. While the government bore the expense of maintenance and food, Lord Londonderry paid for all other expenses.

While showing rapid expansion to match up with wartime developments, Seaham Hall Hospital maintained some rules from its opening in 1915. Visiting hours were consistently 2-4pm every day, and no soldier was permitted to stay in Seaham Hall Hospital for over three months. The only exception was possibly a Mr. Williams, a soldier suffering from neuritis [nerve inflammation]. The Dowager Marchioness of Londonderry herself pled for his extended stay Seaham Hall after his recovery, as his wife was “delicate” and they had no children. Mr. Williams, if the plea was indeed successful, possibly remained at Seaham Hall as a guest of the Matron.

The Hospital was closed and Seaham Hall returned to the Londonderry family after the First Word War. By May 1922, many possessions within Seaham Hall were sold in auction, and the structure entered a period of abandonment.

The third phase of Seaham Hall was the government-managed, Seaham Hall Sanatorium. Opened 4 April 1928, the Sanatorium admitted 22 patients who were suffering from tuberculosis. It was staffed by a Day, and Night sister, staff nurses, probationers and other service staff. Seaham Hall underwent major alterations with the introduction of medical facilities – X-Ray Rooms, Dark Rooms and various laboratories were set up within the structure. With food supplied from wider Seaham, and milk provided by the nearby Seaham Hall Farm, the Sanatorium was mainly self-sufficient until its closure in the 1950s. The structure once again entered a brief phase of abandonment before it was purchased by a private owner, who converted Seaham Hall into Seaham Hall Hotel.

Seaham Hall remains to be known and used as Seaham Hall Hotel today. The building is a Grade II listed building, protected by law.


The following information comes from records held at the archives at the Museum of the Order of St John, and is used with their kind permission. Reference OSJ/1/1/12/19:

Commandant: The Dowager Marchioness of Londonderry

Hospital: This is a house which has been kindly lent by Lady Londonderry for the purpose of a hospital.

VADs: There are no VADs at this hospital
1 voluntary cook

Remarks: This hospital is situated near the sea, in a fine old house. It is in excellent order, and has every convenience for the patients and staff. A good mess room and recreation room, the kitchens are in good order.