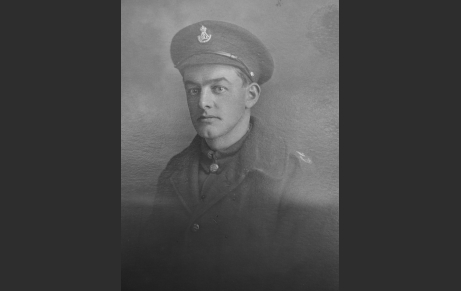 Martin William Hall With many thanks to the Hall family

Born in 1889 in Hetton le Hole, County Durham, Martin William Hall was the son of William Hall, a miner, and his wife Sarah Hannah. On the 1911 census, the family was recorded as living at 28 Station Road, Hetton le Hole. Martin William, living with his parents, brother and two sisters, was working as a grocer’s assistant. William and Sarah had had two further children who had died by 1911; one of whom was a daughter Gertrude who had died in 1906 at the age of 18.

Martin Williams’ service papers have not survived, but the family have photographs of him in the uniform as a private in the Durham Light Infantry. A later photograph of him shows him wearing a service cap with the cap badge of the Army Service Corps. The only official surviving documentation concerning his service during the war is his entry on the absent voters list, which records him as serving with the Labour Corps with the service number 316961.

Martin’s younger brother Ernest also served during the First World War, beginning his service in France in October 1915. He fought as a corporal in the Royal Army Ordnance Corps with the service number 03161.

Martin married Edith Wilson in 1922, and lived in Dawdon. The couple had three boys. Their son Cyril Martin was lost in 1940 on the S.S Empire Airman which was torpedoed whilst on convoy HX72 in the Atlantic.