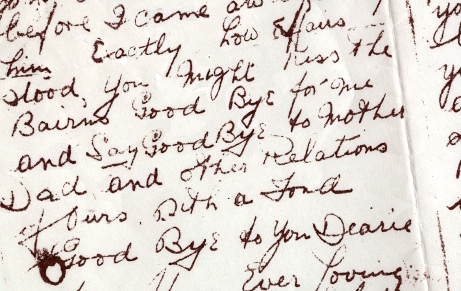 Last letter asked his wife to "kiss the bairns goodbye"

Joseph Furness was born in Shildon, the third son of Thomas and Elizabeth Furness. He had eight siblings, John, George, Christopher, Jane Ann, William, Frederick, Richard, and Robert. According to the 1901 census, the family lived at 79 Auckland Terrace in Shildon.

Joseph, his father and his brother George worked as coal miners. He married his wife, Annie Ward, sometime between 1901 and 1906, and the family lived in Birtley. Joseph left his job as a miner in 1906 to join the Durham Light Infantry. He was 19 years and 9 months old, 5 foot 4 inches tall, and weighed 132 lbs. He served first with the 2nd Battalion DLI, rising to the rank of corporal. When war broke out he joined the 10th Battalion DLI at Newcastle upon Tyne and was promoted to sergeant.

Acting Company Sergeant Major Joseph Furness died at 1:30am on 13 October 1915 due to pneumonia and rheumatic fever contracted while on active duty. A Casualty Clearing Station officer recorded that he died in the field, before he could be transferred to hospital.

Joseph wrote the following letter in June 1915 when the 10th Battalion DLI first went into action on the Western Front. It was sent home to Joseph’s widow in South Church, Bishop Auckland, after his death on 13 October 1915. (A copy is now preserved in Durham County Record Office, ref. D/DLI 7/236/1).

“To my Dear Wife,

I don’t want you to receive this letter but, in case you do receive it, you will know that it is the last letter I shall ever write to anyone on this earth, because it will only be posted in the event of my death.

I am awfully sorry to have to leave you like this, Dearie, buried away in a foreign land. I am also sorry to be the means of causing you pain. The only request I have to make under the circumstances is that you don’t grieve too much about me. And my last wish is that you marry again if you find anyone you think worthy of taking my place. You are still quite young and it would be a shame to spoil your life simply for a memory. I am not asking you to forget me wholly but just enough to enable you to take a grip on life and to enjoy it as you deserve to do.

If Jack or Barney get safely back they will let you know where I am buried and how I died but there is one thing you may rest easy in the knowledge that I died as bravely as any of them with my face to the foe. For I am not at all afraid to die if my turn has come.

Dad will see to affairs for you because I wrote to him before I came away telling him exactly how affairs stood.

You might kiss the bairns good-bye for me and say good-bye to Mother, Dad and other relations of ours.

With a fond good-bye to you, Dearie.

From your ever loving husband, hoping that we shall meet in the world to come.

This almost unbearably sad letter is now immortalised in The Durham Hymns, a major new work for brass band and choir, commissioned by the Northern Regional Brass Band Trust and Durham County Council in 2016 to mark the hundredth anniversary of the Battle of the Somme. With lyrics by the Poet Laureate Carol Ann Duffy and music by Jessica Curry and Orlando Gough, this suite of hymns is a moving tribute to the thousands of Durham men who served in the First World War.